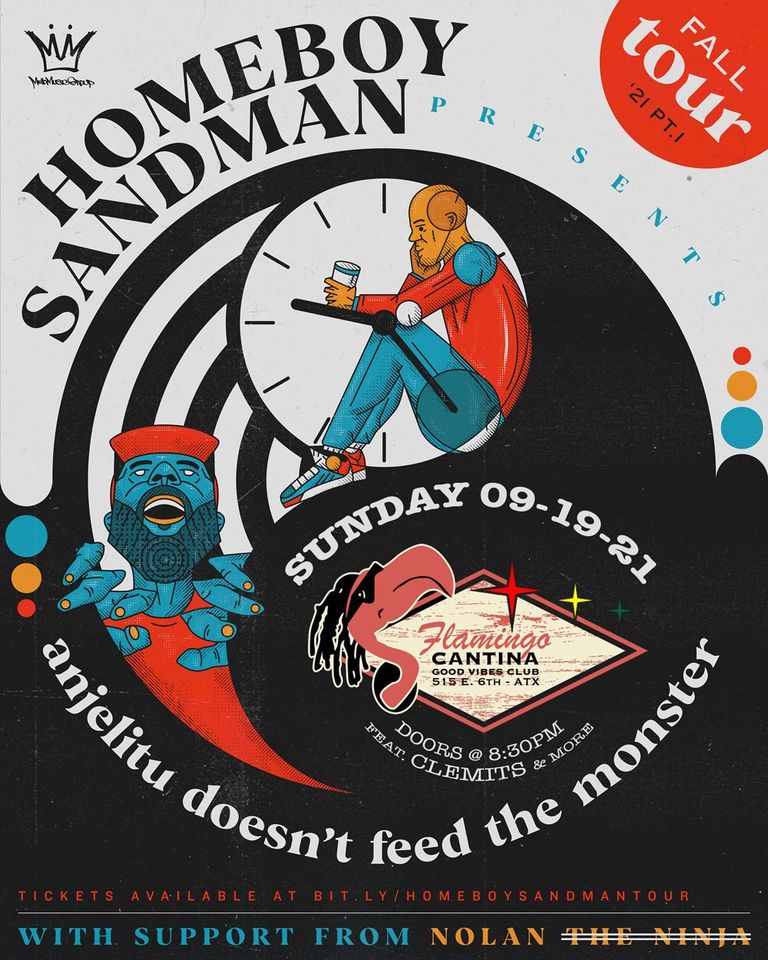 Anjelito Doesn’t Feed The Monster Tour 2021
starring Homeboy Sandman + Nolan!
09-19-21 @ Flamingo Cantina – Austin, TX
Ages 21+ Welcome, Doors open at 8:30pm featuring special guests Clemits & more.
Advance Tickets:
$10 Limited Early Bird Special
or $12 General Admission at: bit.ly/3zIgoeN
Any remaining tickets will be $15 at door day of show on a first come, first served basis.
Homeboy Sandman put out Don’t Feed the Monster last year but didn’t get to tour it. Homeboy Sandman is putting out Anjelitu in August. Homeboy Sandman is excited to perform again he hasn’t in a while. Homeboy Sandman loves God and when he finds unwanted bugs in his apartment he does his best to capture them without harming them and then he throws them out of the window. Allegedly getting thrown out of the window doesn’t hurt them because of exoskeletons.
Nolan (The Ninja) Cali-born. Detroit-bred. Laid back yet ardent. These are all ways to describe NOLAN, the young MC / beatmaker with one of the highest ceilings in the game. Since 2019, NOLAN (formally / also known as Nolan The Ninja) has been on a tear. He released SPORTEE — a full length LP on hip-hop indie heavyweight, Mello Music Group — toured Europe, and regularly collaborated with some of rap’s most creative artists including Homeboy Sandman, Chuck Inglish of The Cool Kids, Quelle Chris & more. He most notably gained global attention after performing his track “Oranges” on the popular Berlin-based series, COLORSxSTUDIOS. In 2020, amidst the pandemic, NOLAN independently dropped TALK SOON, an innovative mixtape that received positive reviews from OkayPlayer, Passion of the Weiss, etc. With a follow-up project titled P.S. set to release in 2021, expect to hear more from the lead of SPORT CAST.