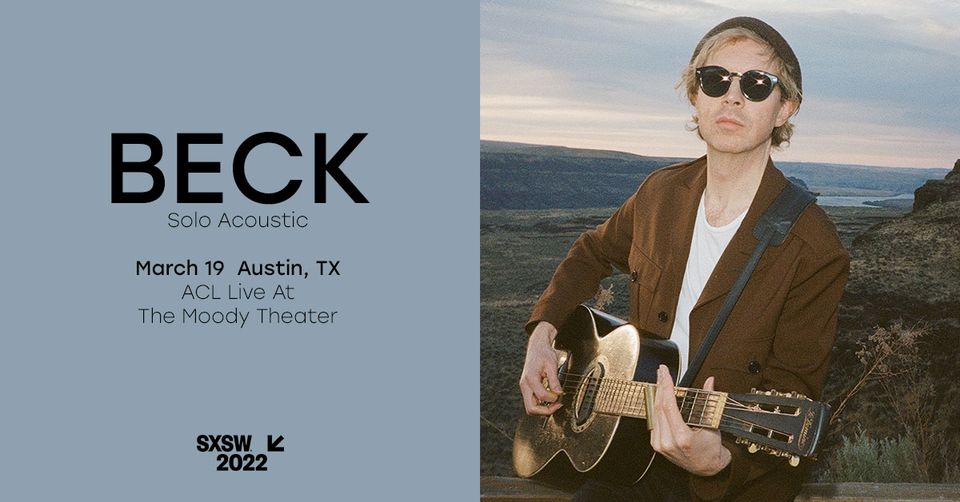 SXSW presents
BECK Solo Acoustic
Saturday, March 19
ACL Live
SXSW Badge and Music Wristbands holders admitted for free, subject to capacity.
Limited single tickets for sale, benefitting Equality Texas and TENT. Single tickets will offer access to general admission seating. Seat location (level of the venue and specific seat) will be determined on a first-come, first-served basis for single ticket holders.
All attendees must must adhere to the SXSW COVID-19 guidelines which require proof of a completed primary vaccination series against COVID-19 or a recent, negative COVID-19 test taken within 72 hours for entry. For expedited entry, download and present your CLEAR app with SXSW Health Pass for proof of vaccination.
Equality Texas works to secure full equality for lesbian, gay, bisexual, transgender, and queer Texans through political action, education, community organizing, and collaboration. TENT is an organization dedicated to furthering gender diverse equality in Texas through education and networking in both public and private forums.
ABOUT BECK
2022 Rock & Roll Hall of Fame nominee and eight-time Grammy-winner Beck has traveled light years from his emergence as a reluctant generational spokesperson when “Loser” exploded into a ubiquitous 1994 smash. Beck´s singular vision has since seen him utilize all manners and eras of music, blazing a path into the future while foraging through the past. Surfacing just as mainstream and alternative intersected, no small thanks to his 1994 debut Mellow Gold, Beck quickly confounded expectations with subsequent releases including the lo-fi folk of One Foot in the Grave and 1996´s multi-platinum Odelay-which has remained a cultural touchstone for generations. Beck´s creative evolution has always progressed at an exponential rate. From the atmospherics of 1998´s Mutations and the florescent funk of 1999´s Midnite Vultures, the somber reflections of 2002´s Sea Change, 2005´s tour de force Guero and 2006´s sprawling The Information, 2008´s acclaimed Modern Guilt, 2014´s Album of the Year Grammy winner Morning Phase, the “euphoric blast of experimental pop” (Rolling Stone) that was 2017´s Colors and his 2019 “best in a decade” (People) Hyperspace… No Beck record has ever sounded like its predecessor – though The New York Times notes a consistent thread: “”Though Beck´s records through the years have tended toward maximalism, a kind of meticulous sonic gorgeousness, melody remains central to his art.”